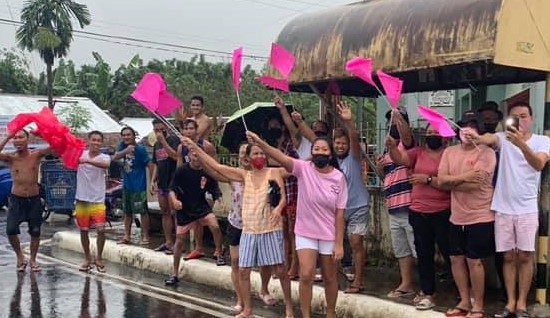 A crowd of supporters has gathered spontaneously in the town of Casiguran, Sorsogon, in a show of support to the Pink Caravan that was organized by supporters of Presidential aspirant, Vice President Leni Gerona Robredo.

The group, known as “Casiguranons For Leni”, waited patiently for about an hour amidst the heavy downpouring of monsoon rains.

The Pink Caravan, passed by along the Maharlika High-way in Casiguran at around 12:15pm noontime, and greeted by waving pink flags and pink tarpaulins by the said group.

Meanwhile, Leni supporters in the province held caravan in Sorsogon City and 7 other towns, such as Prieto Diaz, Gubat, Barcelona, Bulusan, Irosin, Juban and Casiguran.

A big number of volunteers with cars, truck, motorcycles participated in the caravan.

The number of supporters of VP Leni Robredo in Bicol is increasing, according to Luz Guasa of Juban.

“This is the right time to show support for VP Leni. If it happens only now, the Philippines will have a Bicolano president”, Guasa said.

“My only concern is that we Bicolanos can be proud that we have a compatriot president,” Guasa added.