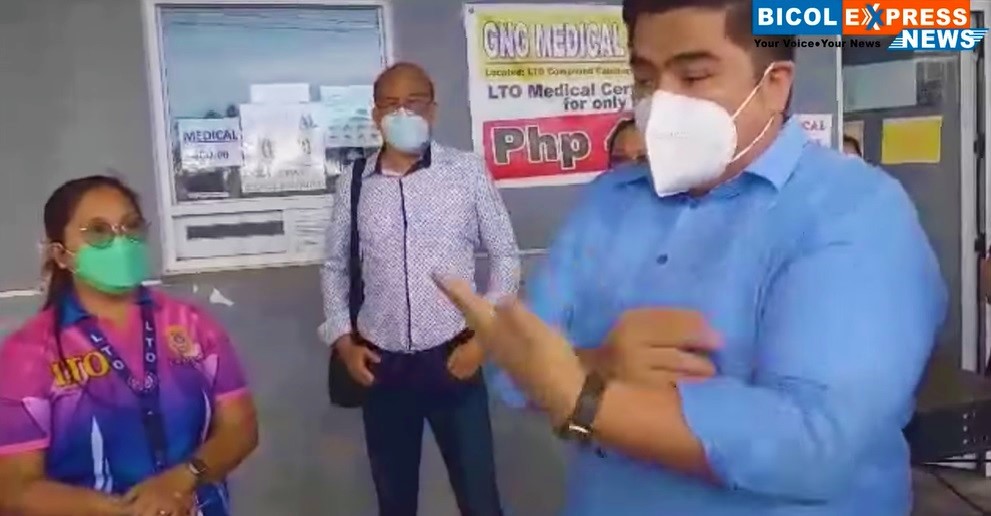 Land Transportation Office (LTO) Bicol Region (V) on Saturday lauded the top official of Anti-Red Tape Authority (ARTA) for his surprise inspection Friday on its Sorsogon district office, which caught him, in video, berating LTO personnel suspected as in cahoots with fixers.

The inspection had led to the arrest of two suspected “fixers”.

The LTO Sorsogon District Office has been the subject of complaints for allegedly facilitating paperwork with grease money at the expense of neglecting other people’s transactions who cannot pay the “fix”.

In a statement, LTO – Bicol in Albay said:
“We commend the Anti-Red Tape Authority (ARTA), headed by its Director General, Atty. Jeremiah B. Belgica, on the surprise inspection that it conducted on Friday, February 18, 2022 at LTO Sorsogon District Office, which led to the warrantless arrest of two (2) suspects for violation of Republic Act No. 11032 (RA 11032), otherwise known as “Ease of Doing Business Law”.

LTO Bicol said: “The agency does not tolerate any activity which violates the provisions of the above-mentioned law and assures the public that any person who commits an act in violation of the law shall be dealt with accordingly.”

On Friday, Bicol Express News, by chance, spotted and took a brief video of Director General Belgica vocally reprimanding the LTO Sorsogon District Office on the alleged presence of fixers.

In its FB page, Bicol Express News immediately posted this story, including this video (see link).

Reacting to the trending video on Atty. Belgica, LTO Regional Office V said it shall “continue in its efforts in ensuring that transactions in the agency are compliant with the mandates of RA 11032 and other laws and regulations.”

“We encourage the public to report any “fixing” and other unlawful activities involving the name of the agency to the Office of the Regional Director, which may be reached thru LTO V’s official Facebook Page: “Land Transportation Office – Bicol”, and mobile number: 0929-499-9577.