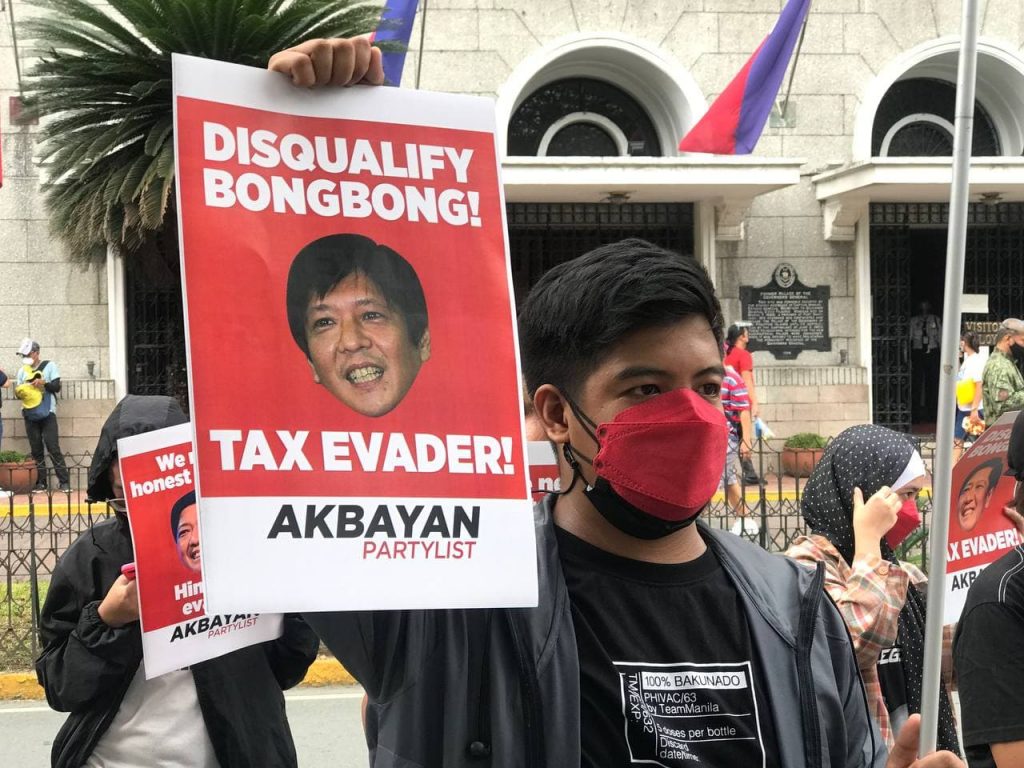 Going around in social media circles are some of the arguments on why Ferdinand Marcos Jr’s candidacy must be canceled by Comelec.

According to proponents, the petition filed against Marcos is NOT a disqualification case.

It’s a petition TO CANCEL Marcos’ Certificate of Candidacy, or deny it due course (which means that the COMELEC should not allow it) because Marcos allegedly lied (“false material representation”).

The proponents say the Legal basis: Section 78 of the Election Code allows the COMELEC to cancel the COC if the candidate writes anything false on it.

To clarify the issue, proponents identified the false entry in the COC of Marcos.

In the COC, there is a section where one have to declare if he/she had been convicted of a crime that carries with it the accessory penalty of perpetual disqualification to hold public office.

Marcos allegedly wrote that he was never convicted of such a crime. This statement was made under oath.

Proponents said Marcos was convicted with finality for four (4) counts of failure to file his ITR under the 1977 Tax Code.

That means four (4) convictions. The Court of Appeals simply removed the penalty of imprisonment – a penalty that was actually required to be imposed together with the fine.

Even if the penalty of imprisonment was removed, Marcos was still declared guilty of the crime and sentenced to pay fines.

“Marcos Jr knows he was convicted”

Proponents said Marcos could not feign ignorance that he was convicted. As proof, Marcos Jr filed an appeal of his conviction with the Supreme Court.

But, he withdrew his appeal later.

As backgrounder, in an appeal, the entire case will be reviewed, and it can be decided against Marcos Jr.

The scenario is that the Supreme Court could overturn the decision of the Court of Appeals, and might sentence him to imprisonment. Appeal also can be a risk when facts are not in one’s favor, the proponents say.

Proponents say Marcos Jr filed an appeal on his convictions with the Supreme Court, but later decided to withdraw it.

By withdrawing his appeal, his convictions became final judgments.

Proponents noted that a conviction does not always carry with it jail time. Being declared guilty of a crime is the conviction.

In Marcos’ case, he was declared guilty and sentenced to pay fines for his crimes.

The most intriguing question: Does the crime he was convicted of carry with it the accessory penalty of disqualification?

Proponents say “Yes it does. Marcos was convicted under the 1977 Tax Code.”

Under Section 286 of that law, any public officer or employee convicted of any violation of the Tax Code “shall be dismissed from public office and perpetually disqualified from any public office” and is prohibited from participating in any election.

When the Tax Code was amended in 1997, that same provision was retained.

That accessory penalty was never removed. The mere fact of conviction carries with it the penalty of perpetual disqualification. It’s part of the law.

“Disqualification or cancelation of Candidacy mandated”

On another question: “What about the argument that disqualification of a candidate applies only to those sentenced to a penalty of imprisonment of more than 18 months or for crimes involving moral turpitude?”

The opinion going the rounds is that provision under the Omnibus Election Code refers only to those crimes that do not include the accessory penalty of perpetual disqualification from public office.

It does not apply to crimes where perpetual disqualification is already part of the penalty (which is why it is called an accessory penalty).

Under the Tax Code, perpetual disqualification is an accessory penalty to ANY violation.

Whether the COMELEC considers violation of the Tax Code as a ground for perpetual disqualification is something we are probably all interested in.

The question of whether Marcos is required to file an ITR should have been discussed in the CA, but it would be interesting as well to see if this will be reinterpreted by the COMELEC.

Lastly, the proponents say the COMELEC has no jurisdiction to reinterpret a final decision of the Court.