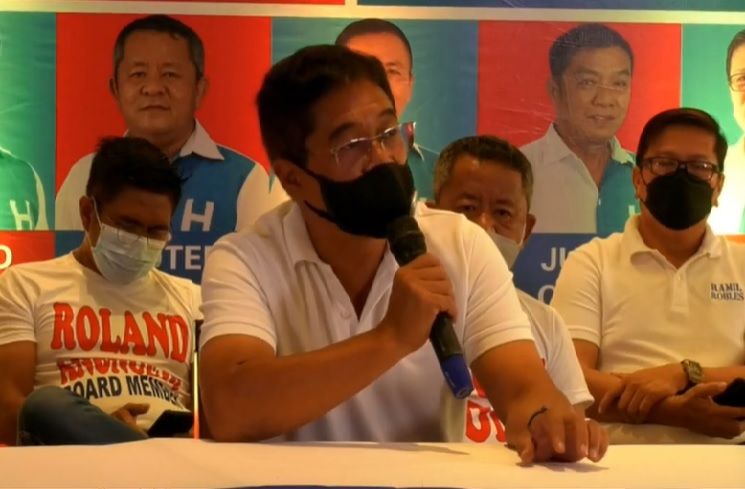 Sorsogon Province – The race to represent the 2nd Congressional district of Sorsogon in the 19th Congress none may have the edge among the contending candidates but with the mushrooming of support for Atty. Manuel “Wowo” Fortes, Jr. the district voters are saying that he is the man to beat.

What resonated with him to the voters was his ability to assess the grassroots needs through a community-driven barangay development aided by efficient service linkages that enhanced the understanding of barangay officials legislative responsibilities by delivering an inclusive growth with a beneficial outcome and sustainability of programs, projects, and services is key to re-develop the untapped potentials of the residents of the rural areas.

The other contenders are former Sorsogon governor Robert Lee Rodrigueza scion of the once political kingpin of the province who was also a former city vice-mayor. Itching his way is Crisostomo Gillego Gotladera, one of the administrators of Pag-ibig fund appointed by PRRD and also a scion of a political family. Edgar Gino whose credential includes as chief of staff of then vice-governor Kruni Escudero but with an entrepreneur approach in his campaign. Fortes on the other hand is the lone lawyer among the aspirants.

The most visible to the district voters is Fortes crisscrossing the district and earning a reputation as a hard-working would-be representative. The other three aspirants were characterized as needles on a haystack for their presence is never felt.

But who is Manuel “Wowo” Fortes Jr.? Can he deliver what the district felt needs?

A San Beda law graduate with fraternity brothers in high government positions cemneted his connections in the national level. His experience in legislation made easy his executive role when he was elected for three consecutive terms as town mayor of Barcelona. One may say that he has the wings behind being part of the triumvirate of Escudero Ramos and Hamor alliance.

His political backers are saying that he is best suited for the rigorous congressional work that carries inter-personal relationships among peers without which one may become a lame-duck member of the house.

During his term as mayor, Barcelona was awarded the coveted Seal of Good Governance, the Seal of Child-Friendly Local Governance, and that of the Seal of Good Financial Housekeeping by the Department of Interior and Local Government. The town revenue was lauded by the Department of Finance and was ranked first in the Bicol Region as impacting projects for agriculture and fishery such as farm-to-market roads, irrigation canals, rivers and causeway flood control. And education was boasted by sourcing funds for the construction of school buildings.

His lowly key but a no- nonsense wife Cynthia Falcotelo-Fortes is a former Municipal Trial Court in City Judge, now the mayor of the town launched the FORTES Advocacy, rolled out province-wide a first of its kind giving pre-assessment, evaluation, intervention, therapy to children as a tool for an Early Identification of Children with Disabilities. The advocacy provides free home programs as it cares the disadvantage children.

It was learned that Project Wowo, a Katarungang Pambarangay Lecture Series and workshop enhanced the understanding of the barangay justice system, its limitations, applicable laws, and responsibilities.

Always “walking his talk” as evidenced by the social services received by his constituents anchored with the principled politics that impacted the general good. the general welfare clause of the Local Government Code his governing bible provided a chance and a new opportunity for its inhabitants to redevelop their potentials for growth.

The voters of the district have to weigh who among the candidates for congressman can deliver the goods and continue the legacy of progress started by former congressman Deogracias Ramos, the scale favors the candidate from Barcelona, Atty. Manuel “Wowo” Fortes, Jr.

But it is still a long road to congress.