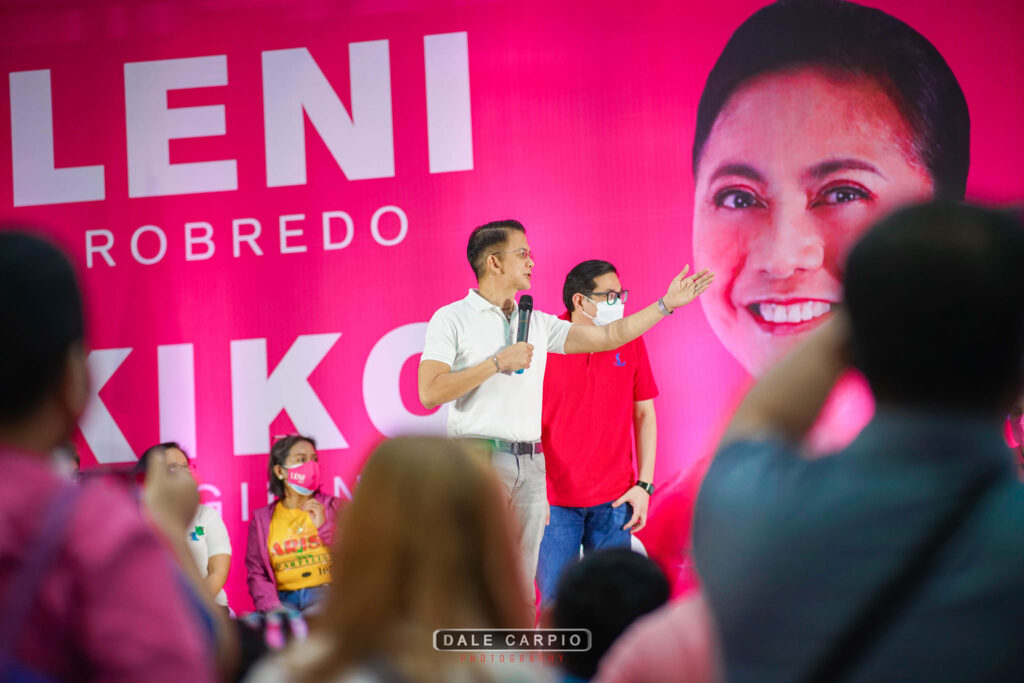 But, Escudero has not returned back Leni’s goodwill by endorsing Robredo for the presidency.

This lack of official endorsement from Escudero has caused anxiety among the Pinks.

“If you wanted a legislator with experience and a good track record as a public servant,” Robredo told the Sorsogon constituents, endorsing Escudero during the campaign rally.

In her speech at the campaign rally of Leni-Kiko tandem at the Sorsogon Gymnasium Wednesday morning, Robredo said Escudero can do a lot for the people when he is re-elected Senator.

“Need to return back to Senate”

“His return to the Senate is a big thing because when he was still a senator, everyone knew that Senator Chiz was one of the strongest legislators. Actually, whether he is Governor or Senator, because of his achievements, it is always an advantage for our country, ”said Robredo in Bicol dialect.

Leni described Escudero, who is a guest senatorial candidate on the Angat Buhay senatorial ticket, as a true leader who puts politics aside and is willing to work with anyone to advance the welfare of the country and the Filipinos first and foremost.

Robredo recalled that when she won Vice President in 2016, the veteran Senator, who himself competed in the said election, approached and offered to help her on how the Office of the President (OVP) can effectively perform its duties. despite of limited funding.

“I am very grateful to Governor Chiz. He didn’t tell me about it but when I became Vice President. . . he helped the OVP, ”said Robredo.

“I never knew that. Governor Chiz and I fought in 2016 but after I won, he reached out. When I was just starting out as VP, he helped the office find a source of funding for our programs, ” Robredo said.

The Vice President also praised Escudero for the good transformation of Sorsogon, despite of the pandemic, achieved by Governor Chiz in less than 3 years, because he only became the chief executive of the province in 2019.

“Sorsogon is very different now. It is very good that you have pushed for change because you have decided to unite here under the leadership of Governor Chiz. When management is clean and united, you can do a lot. That is also what we are fighting for to promote the culture of a clean, honest and orderly governance for a life that lifts all. We saw that here in Sorsogon, ”said Robredo.