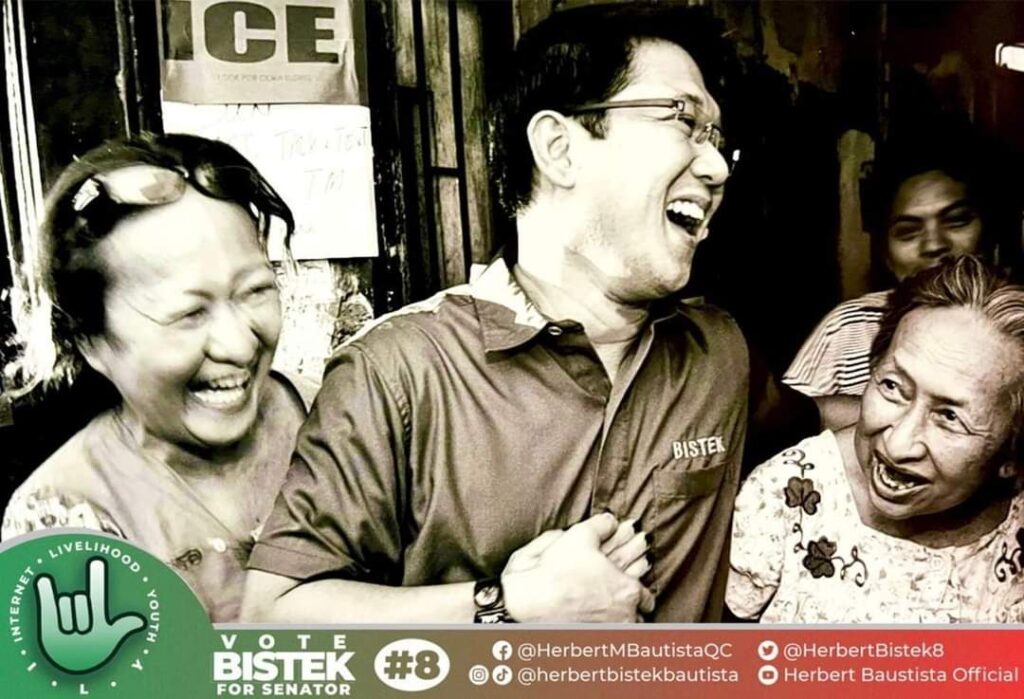 UniTeam senatorial candidate Herbert “Bistek” Bautista proposed a package of aid to micro, small and medium-scale enterprises (MSMEs) that were battered by the economic impact of the COVID-19 pandemic that could include providing up to P100,000 in loans to each small enterprise that is trying to reopen.

“But let’s not give aid without a condition,” said Bautista, citing a similar assistance program for small businesses hit by the pandemic in Japan, Germany and the United States as examples of what the Philippine government can do for local MSMEs.

“I’ll give you an example. I’ll give you 100,000 pesos to restart but you should hire those employed with you before,” said Bautista, who is running on a platform of Internet reform, Livelihood for all and Youth development (ILY0 and Pagkain para sa Pamilyang Pilipino.

“Or if you’re just opening, or opening a new business, you must hire these unemployed people,” he said, referring to workers who lost their jobs at the height of the pandemic.

“But we won’t just give assistance without conditions,” said the three-term mayor of Quezon City.

“In exchange, jobs should be created because we have many countrymen who lost their jobs in the last two years because many businesses closed shop,” he said.

He said incentives, aside from aid, would also help bring back MSMEs to life.

“If we’re able to do that as a senator, we can help entrepreneurs and our economy would become vibrant again,” Bautista said.

In a previous statement, Bautista expressed alarm over the rate of closure of MSMEs, saying that he believed that between 70 and 80 percent of MSMEs that closed at the height of the pandemic remained closed.

“When I went around nationwide I talked with the mayors and I asked them: For every 10 businesses that closed during the pandemic, how many are now reopening under Alert Level 1?” said Bautista in a previous interview with radio station dzJO Baler.

“They said in every 10, at least three or two have reopened. That means 80 or 70 percent of the businesses are still closed,” said Bautista.

Bautista said there should be priority attention, too, on cooperatives, which he said are among the biggest sources of jobs in the country.

“They will create jobs and productivity,” he added.

“The important thing, for me, is for them to reopen,” he said.

“All businesses must reopen to provide many jobs to our countrymen. So it will be an employment opportunity for our people,” said Bautista.

He said by fully reviving MSMEs, underemployment can also be addressed which would help strengthen the economy.

“Those are the things I see I can do if I become senator of the republic,” said Bautista.