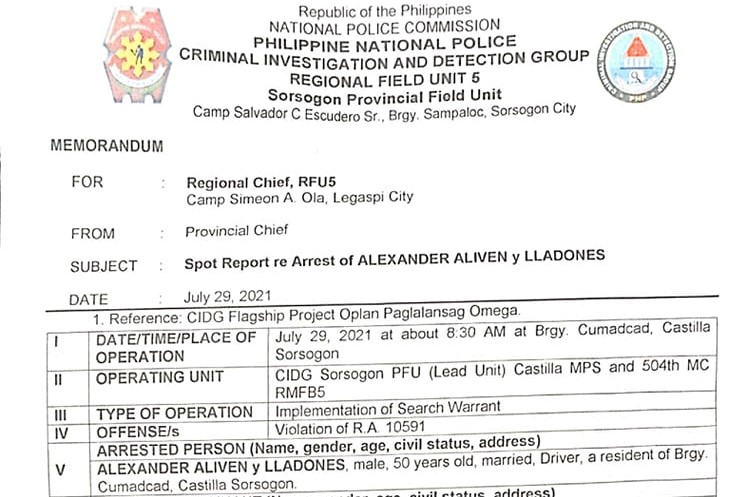 Police in Sorsogon Province nabbed the bodyguard of Castilla Mayor Isagani “Bong” Mendoza for violation of R.A . 10591, law on regulating firearms and ammunition.

Arrested by police on Thursday morning, July 29, was suspect Alexander Aliven, 50, and a resident of Barangay Cumadcad, Castilla.

Seized from the suspect was a 9MM pistol, 2 magazines for 9mm bullets, 32 bullets 9mm, 50 pieces empty shells, one inside holster, and 1 sling black bag.

According to CIDG, they were implementing the search warrant issued by Hon. Zach Zaragoza-Ziga of RTC Branch 12-FC on Tuesday, July 27, 2021.

The operatives led by CIDG-Sorsogon, Castilla policemen, and elements of 504TH MC RMFB5 conducted the search operation leading to the recovery of said evidences.

Suspect Aliven is one of the known bodyguards of Castilla Mayor Mendoza.

As of presstime, the suspect is under CIDG custody for processing, allegedly violating RA 10591 or “AN ACT PROVIDING FOR A COMPREHENSIVE LAW ON FIREARMS AND AMMUNITION AND PROVIDING PENALTIES FOR VIOLATIONS THEREOF”.