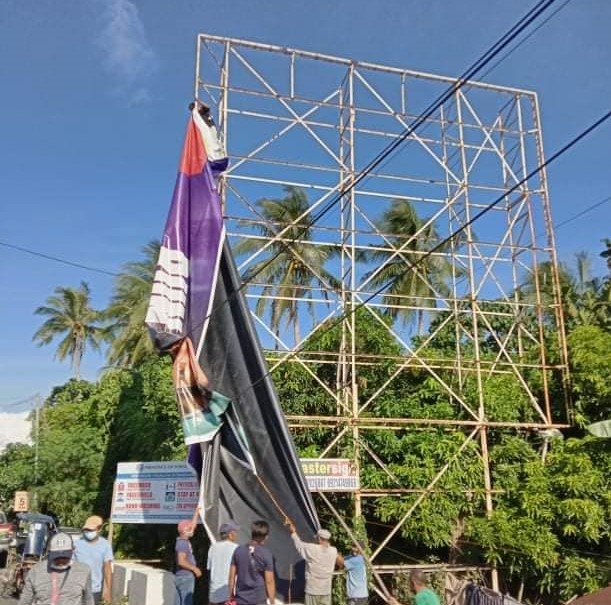 According to the legal officer, Globe’s non-compliant billboards, and others were also removed in the past.

Lawyer Oropesa disclosed that there are at least 3 billboards that were removed by the Sorsogon City Government for refusal of the advertisers/promoters to pay the Permit fees, and to deposit PHP 100,000 bond to shoulder whatever damage it may cause to the general public, in case an accident may arise.

They were ordered removed not because of Sara Duterte’s photo on it, but because the promoters/ advertisers refused to pay the required permit fees.

“The installation of the said billboards without paying the required Permit Fees is a flagrant violation of City Ordinance No. 13, Series of 2019,” Lawyer Oropesa said.

It’s an amendatory law to a 2017 law on billboards and printed commercial advertisements.

Referring to Bicol Express News news article, “Please don’t confuse the public by politicizing the issue of removal. Globe’s non-compliant Billboard was likewise removed along with other illegal billboards,” the lawyer said.

According to this online media group, its reportage is plain reporting on matters of public interest.

But, strong social media reactions have impacted the removal issue, making it a sizzling politicized issue.

Meantime, amid the lawyer’s plea to “depoliticize” the removal issue, netizens in Sorsogon have reacted, making known their sentiments.

As a reminder, the Sorsogon political leadership, both in the City, towns, and Province, belongs to the Nationalist People’s Coalition (NPC).

Other netizens have their own independent opinions:

These are a few among the various comments in the social media.