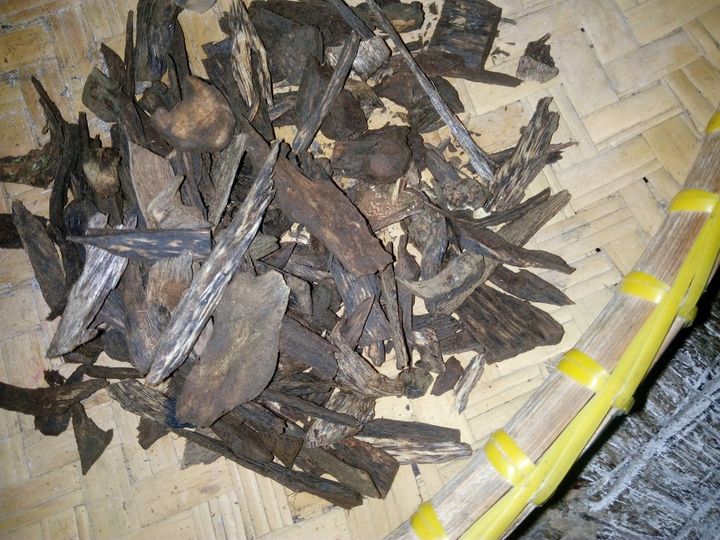 About 500 thousand pesos (Php 500,000.) worth of agarwood vanished under DENR sàfekeeping in Iriga City, Camarines Sur.

The said amount is equivalent to one kilo of agarwood found missing among the confiscated 23.1 kilos of agarwood in one apprehension incident.

Agarwood is a source of essential oil used for fragrance and perfume, commanding a high price in the international perfume market.

The wood products were confiscated in Pili from two passengers from Tacloban inside a Manila-bound bus but, the two were not charged in Court.

As backgrounder, on November 24, 2019, at about 1:30 a.m., Pili policemen apprehended 23.1 kilos of agarwood or “lapnisan” which were heavily wrapped and sealed in plastic bags hidden inside a samsonite bag, a police source said.

The seized agarwood were worth a total of about Php 11.5 million.

The banned wood products were seized on board a DLTB bus allegedly belonging to 2 passengers, one suspect from Surigao del Sur and the other from Jaro, Leyte, both travelling from Tacloban to Pasay City.

The seized items were turned over to CENRO Iriga, but when it was later turned over to DENR regional office, the said chopped agarwood pieces were allegedly short of one kilo, a reliable anonymous source said.

The one-kilo loss is allegedly blamed on “loss of moisture content”.

Also, no complaint was filed against the suspects considering the big amount of agarwood being illegally transported.

A citizen group, Environmental Warriors, will inform the Office of the President and DENR Secretary Cimatu regarding this issue.

Photo:
Chopped Agarwood. This is how agarwood looks like when chopped into small pieces. According to an informant, the pieces of agarwood or “lapnisan” in this photo are remnants or rejects of inferior quality left out by poachers who felled a tree illegally in an undisclosed forested area in Camarines Sur. (Contributed photo)