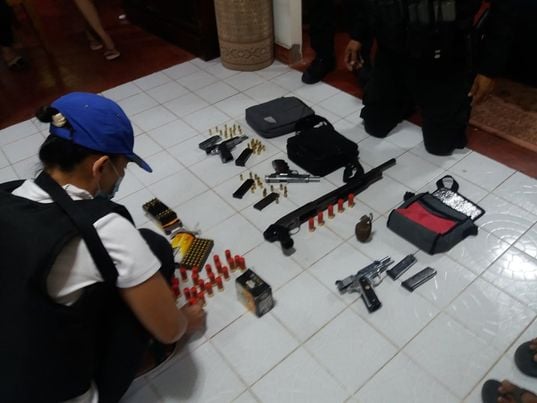 Guns, grenade and ammunitions confiscated by PNP at the residence of Revor Lasay. Contributed photo

A motion filed by the lawyer of Revor Lasay accused of violation of RA 10591 (The Comprehensive Law on Firearms and Ammunition…) for hospital arrest was junked by Judge Refobar Gerona of Sorsogon RTC Branch 53, Friday, August 27, 2021.

Lasay appeared in a wheelchair during the hearing and filed an Omnibus Motion to quash, suppress evidence, declare illegal arrest, to release the respondent from the case. He was arrested by virtue of a search warrant issued by the same judge.

After his arrest Lasay underwent an operation in one of the hospitals in the city.

He is also facing a separate criminal complaint for sexual harassment and is out after posting a 36,000 peso bail.