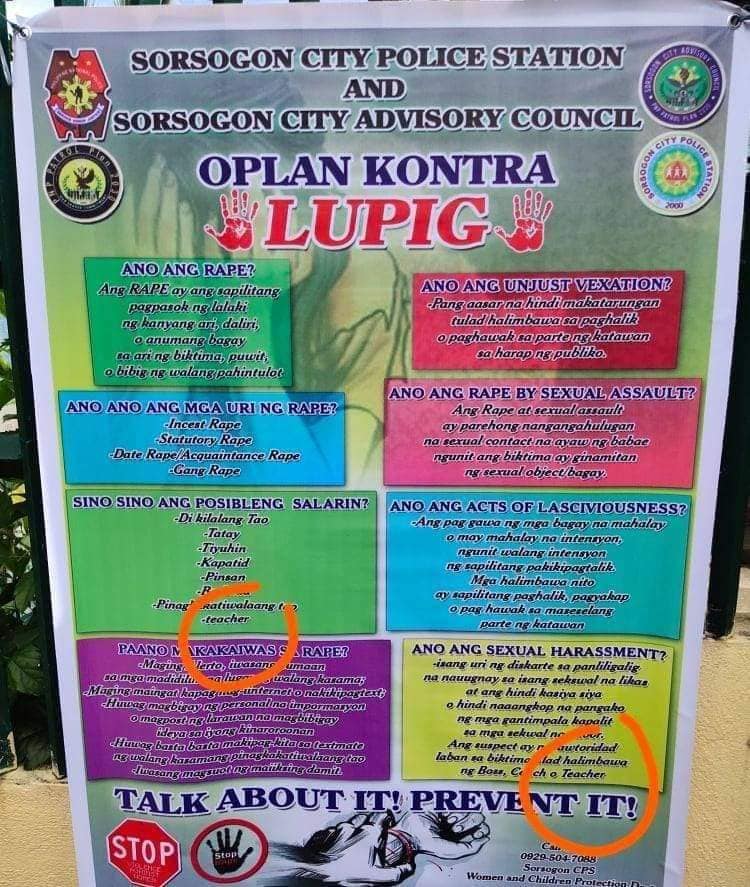 Singling out teachers as “possible rapists” by anti-rape advocacy groups has caused uproar among the academe and education sectors in Sorsogon.

The turmoil has forced the Sorsogon provincial police advisory council to distance itself from the current brouhahas, demanding for the pullout from public view the “offensive tarpaulins” and change
“content”.

The protest started when tarpaulins expressing anti- rape advocacies identified the teachers as “possible rape suspects” among the short list.

The tarpaulins are public info materials, coming from police and City advocacy groups.

Edgar Balasta, Chairman of PNP Provincial Advisory Council, in a statement apologized, saying “I would like to categorically deny knowledge and participation in the production of such campaign materials.”

Balasta said the City police and LGU advisory councils are separate from the PNP Provincial council he is representing.

He said Sorsogon PAC condemns the prevalent of rape cases in the province, but are protective to human dignity.

“Teachers are partners in the upliftment of high moral standard and are not culprit of these heinous crimes,” he said.

“Singling out teachers as possible rapists is not acceptable,” Balasta said.

As per record, rape cases usually occur in the marginalized sectors, and are driven by many factors like having a dwelling where bedroom are shared by one family, influence of liquors, etc.

With this, PAC demands an APOLOGY from the PNP Sorsogon City and City Advisory Council for this insensitive post and singling out teachers as possible rape offenders.

“I demand pulling out of same campaign materials and further improve the content of the campaign,” Balasta insisted.