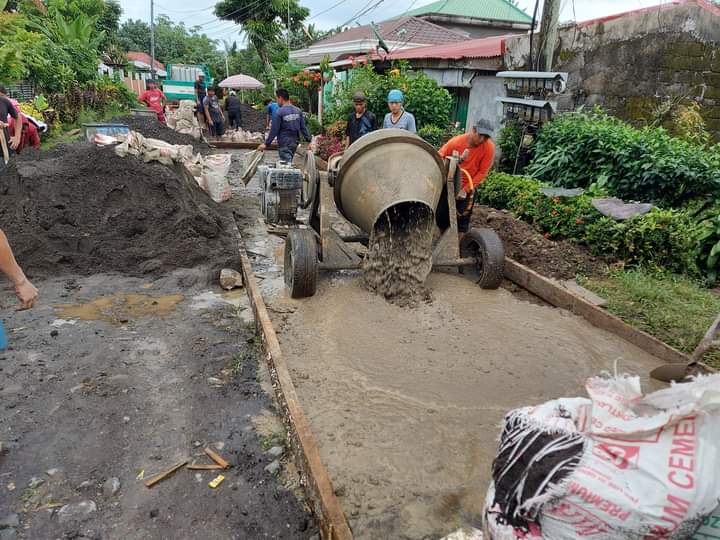 The donor instructed his work gang to cement the road section on Thursday morning, and in the afternoon, 20 meters of concrete roadway was finished, all in a day’s work, as form of donation.

Jerome Lelis heard news from the media that homeowners in Sta. Cecilia Subdivision individually contributed their money to cement a section of a road without asking any government assistance.

The news about the homeowners self – help road concreting project was first reported in online news, Bicol Express News, and 2 days after, reported by GMA TV.

Lelis , from an affluent family in Tigaon, informed Russel Rosero about his donation on Wednesday.

Rosero is president of Sta. Cecilia Subdivision Homeowners Association (SCHOA) and he is the project proponent.

SCHOA President Rosero warmly received the donation of Lelis , who was accompanied by barangay captain Herman Melgarejo of barangay Talojongon.

Lelis brought with him a work gang of several men, several bags of cement, gravel and sand, and started the concreting on Thursday morning.

That afternoon, same day, the concreting of 20 meters road way section was finished.

Lelis paid for the laborers and materials.

“I personally challenge the 8 municipal councilors of Tigaon to donate at least 10 meters each for concreting of this Sta. Cecilia Subdivision road,” Rosero said.

He said many years had passed, most of the 8 councilors got re-elected, some had finished their 3 terms, but never had they thought of giving a single bag of cement to this subdivision, and election time again, asking support from us.

Rosero said only incumbent Vice Mayor Caloy Llaguno donated 30 meters of concrete partial roadway back in 2001, when he was a town councilor.

“We welcome any contribution for this road project, even coming from the Camarines Sur Provincial Government or LGU-Tigaon” Rosero voiced out his wish.