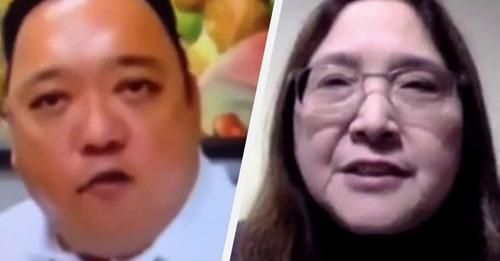 The outburst of Secretary Roque did not sit well with Dr. Maricar Limpin, president of the Philippine College of Physicians after she was castigated by the palace mouthpiece during the meeting of the Inter-Agency Task Force.

The dire situation of hospital capacity in Metro Manila overwhelmed by Coronavirus patients was the group plea to the government to impose a hard lockdown of the area but Roque was overheard saying in a video clip. “This group, they have never said anything good about government response.”

Limpin clarified that their group was saying the truth based on facts as the surge of COVID-19 in Metro Manila is a record high. We were invited representing the health force labeled Roque’s statement as “unprofessional” behavior and called for his resignation and must apologize to the health workers for his outburst and visibly pissed-off

Though Roque apologize but said that his message stand. In a video clip, he became a blabbermouth but netizens together with some doctors slam Roque for his arrogance, bloated ego, and anger.

Dr. Tony Leachon a former advisor to the National Taskforce has this to say in his Facebook post… “You have NOTHING good to say the
Filipinos, referring to Roque adding We deserve better leaders.”

His rudeness did not pass with Dr. Leni Jara rebuking him for his behavior in lambasting health care workers who take care of patients this time of the pandemic. Jara is a member of the Solidarity of Health Advocates and Personnel for a Unified Plan to Defeat COVID-19 (Shape Up).

The outburst of Roque was directed to a group of doctors who express their grievances for the controversies hounding the government response in reversing the trajectory of Covid cases coupled with the corruption of DOH funds during the IATF meeting Tuesday. He reasoned that the government employed the “entire government approach thinking about the economic ramification, thinking about the people who will go hungry. It does not mean that we care less.”