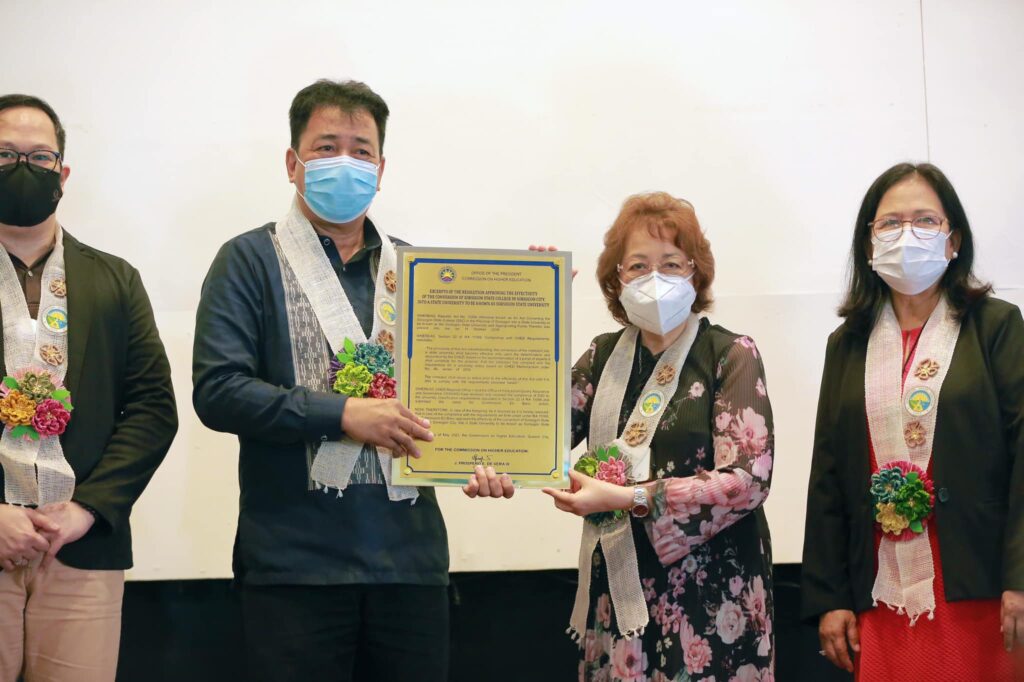 SORSOGON PPROVINCE – For the last time, the Sorsogon State College hymn was played its logo will be replaced as it fades gloriously in history by giving birth to Sorsogon State University and on its former facade a new logo as their community sings its new hymn.

It is not the ceremonial declaration that Sorsogon State College was formally elevated as a university but it was the monumental achievement resulting from the collective and assiduous efforts of the faculty, non-teaching personnel, researchers, the student body, the guidance from the Commission on Higher Education that after almost three years complying the intent of Republic Act 11088, the stakeholders labor became the newest University of Bicol.

In the words of Congresswoman Evelina Escudero the road it travelled when measured is miles no end starting during the 17th Congress when it was taken at the plenary until the law converting the Sorsogon State College into a University was signed on October 2018. From then on, bus stops after bus stop, so to speak should be loaded with the master and doctoral degree, competency, transparency, milestone of achievement, international exposure, research aside from absorption of a midwifery school, laboratories, specialized buildings for hands-on training, a dormtel, library and ending at its own gate, Sorsogon State University is ready to accept the challenges which they will turn into an opportunity for growth, saying Sorsogon we are ready.

The stakes are high, discipline, long hours and patience are virtues exhibited by the faculty and staff at the main and of the four campuses. They made sure that within their fields as required will not be the hold-out as an excuse to derail the dream of SSC to become a university. SCC community from day one of their “hundred miles walk” survived the boot camp of their journey as implored by Dr. Helen Lara we are aligned with the spirit of the law that created our University and will make sure that from this day onward we will not falter.

Dr. Prospero De Vera, chair of CHED said, access to education should be coupled by a quality education. This is a challenge for SSU, adding that increase in salary and creation of new items should not be equated to how a university should be seen, rather, it must be equipped with the right educators in their respective fields without
it dysfunctional academic results will happen.

Now that SSC is SSU, a bastion of excellence as written on the pages of its predecessor history is to repeat itself. I bicolexpress.news