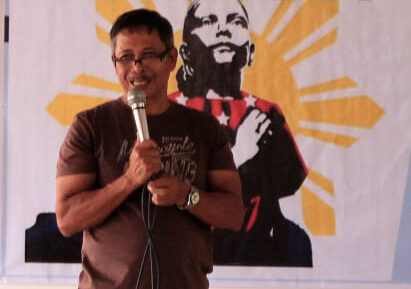 Sta. Rosa was arrested at around 3:00 a.m. in her house at Cararayan, Naga City in Camarines Sur.

While Balucio was seized an hour later, in his home in Sto. Domingo, Albay, according to a Facebook post by Karapatan Bikol.

The two were arrested by virtue of search warrants issued by Legazpi City Judge Edgar Armes.

The two activists may face charges of “illegal possession of firearms and explosives,” which are nonbailable offenses.

Meanwhile, Pastor Balucio’s house was raided by elements of the Criminal Investigation and Detection Group (CIDG) from Camp Simeon Ola, the headquarters of Police Regional Office 5 based in Legazpi City, Albay.

Youth group, Anakbayan Naga said policemen had spent around 40 minutes scouring through Sta. Rosa’s room, after which they had allegedly “recovered” a bag full of guns and grenades.

These “recovered evidences” were planted, Anakbayan Naga said in a report.

Balucio’s arrest was similar. A staff member of the National Council of Churches in the Philippines, and Balucio’s kin were asked to lay on the floor, while authorities raided the place he was staying at.

“Seized” during the search were grenades and guns, the youth group said in its report.

Sta. Rosa is currently detained at the CIDG office in Naga City, while Balucio’s whereabouts are still unknown.