A call for “bugkos” — Bicolano term for unity in the upcoming elections through choosing better governance was depicted through symbols of a pink rose, ribbon, and different sectors in the community, in a recently unveiled citizen-led mural in Sorsogon City.

The mural, titled ‘Bugkos’ itself, measures 5 feet by 31 feet, and is featured on a resident-owned gate of a compound in Barangay Balogo.

The project was sponsored by private citizens living inside the compound in collaboration with Bicolano artists of Kurit-Lagting Art Collective.

It is the second mural created by the same artists in the city that have immortalized citizen demands for good governance and social justice.

The highlight of the mural is its solidarity with the “Rosas ang Kulay ng Bukas” campaign of Bikolana presidential aspirant and Vice President Leni Robredo.

In the mural, a woman waving the Philippine flag is adjacent to a child who is holding a rose, an apparent bid to illuminate the rose’s symbol for bringing and passing change to the world.

On opposite sides of the featured text and pink symbols are also actual depictions of Sorsoganons or the term used for people living in Sorsogon, as they strive for various sources of livelihood, and supplemented with icons and symbols for their clamor for good governance, people’s participation, gender equality, climate justice, peace, and human rights.

According to Maria Libertad Mella, one of the owners of the mural space and a gender and humanitarian advocate, the initiative to create a community-driven mural is rooted in the family’s support and unity with fellow Sorsoganons who dream of change in Philippine governance.

“The Bugkos mural represents the extraordinary history, culture, and character of the people of Sorsogon when it comes to taking a more active and responsive role as citizens,” Mella said.

“Our family, in this compound, stands in solidarity with fellow Filipinos who are fed up with patronage politics and massive corruption. We strive for honest living and responsible citizenship and we aspire for leaders to be honest and excellent in their work.”

As the election season is at its near draw, Mella referred to the tested power of art to remind people of their important participation in paving the road for change by voting for quality leaders.

“We believe that we can encourage everyone to work together in voting for a government that is dignified, compassionate, and empathetic to the needs of the people. We can only have an equitable future when voters use their power to change the behavior of the government by exacting transparency and accountability from them,” she added.

Kurit Lagting Art Collective artists Allan Abrigo, RJ Abrigo, and Don Angelo Laureta also considered their work as their way of immortalizing their own stand in the Filipinos’ power to vote for change.

This was supported by Kurit Lagting Art Collective Art Director Geri Matthew “Choi” Carretero who emphasized that the group considers their work as a product of, not just their love for art, but their own love for the cause of the ‘Rosas ang Kulay ng Bukas’ campaign.

“The mural is also a testament that we stand in solidarity with the ‘Rosas ang Kulay ng Bukas’ campaign.

Our art piece wants to amplify the people’s demand for a leader who is just, accountable, and responsible,” Carretero said.

About the Art Collective

The Kurit-Lagting is a collective artistic collaboration of Bicolano artists from Sorsogon, Albay, Catanduanes, Masbate and Camarines provinces with art advocacies on human rights and the environment.

The Art Collective is a member of the Sorsogon Arts Council and the Concerned Artists of the Philippines Bicol Chapter. 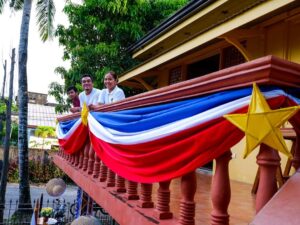 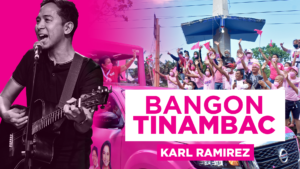 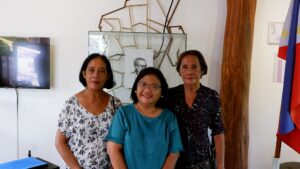 Works of Sorsogon writer Fresnosa given fresh breath of life