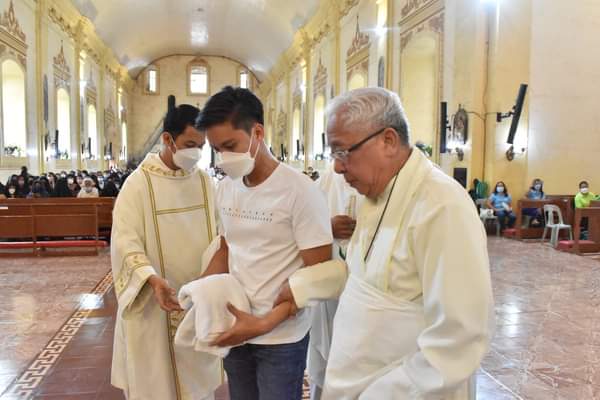 San Jose Mayor Doc Mac Chavez in Camarines Sur took a solemn rest from the political campaign in the Holy Week and gave time for the “washing the feet of the disciples” with Most Rev. Rolando J. Tirona, Archbishop of Caceres.

Archbishop Tirona led the “Rites for washing the feet of the 12 disciples”, at the Archdiocesan Shrine of St Joseph, the start of the Holy Week Triduum Mass.

Mayor Doc Mac Chavez assisted Archbishop Tirona by carrying the basin of water being used in washing the feet of the “disciples”.

Mayor Doc Mac is running for reelection while his father, ABC Antonio B. Chavez, is also running for Congress to represent the 4th District of Camarines Sur.

Congressional aspirant ABC Chavez also took a leave from the political campaign in observance for the Holy Week.