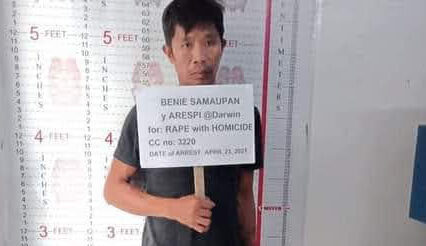 BULUSAN, Sorsogon – The prime suspect in the rape slay of Roda Devera Fortes is now in the hands of the law after seven years in hiding. The 39-year-old suspect is Benny Arispe Samaupan alias Darwin/Dagohoy.

Roda is a grade school teacher assigned at Caperecohan on her way home was forcibly taken by the suspect then rape. Her body was recovered partially hidden in a watery grave days after the killing. She was a newly hired teacher. Dagohoy was charged with rape and homicide and a warrant of arrest was issued for Criminal Case No 3270 by Judge Bernardo Jimenez Jr of RTC Gubat on June 18, 2015.

To resolved the case a manhunt codename” Charlie” was launch involving composite elements of PNP Crame, Nueva Ecija and MPS Bulusan. He is a most wanted person with a reward when arrested at Barangay Poblacion, General Tinio, Nueva Ecija April 24, the manhunt is part of the SACLEO strategy of the PNP. At the time of his arrest he was earning a living as a construction worker.