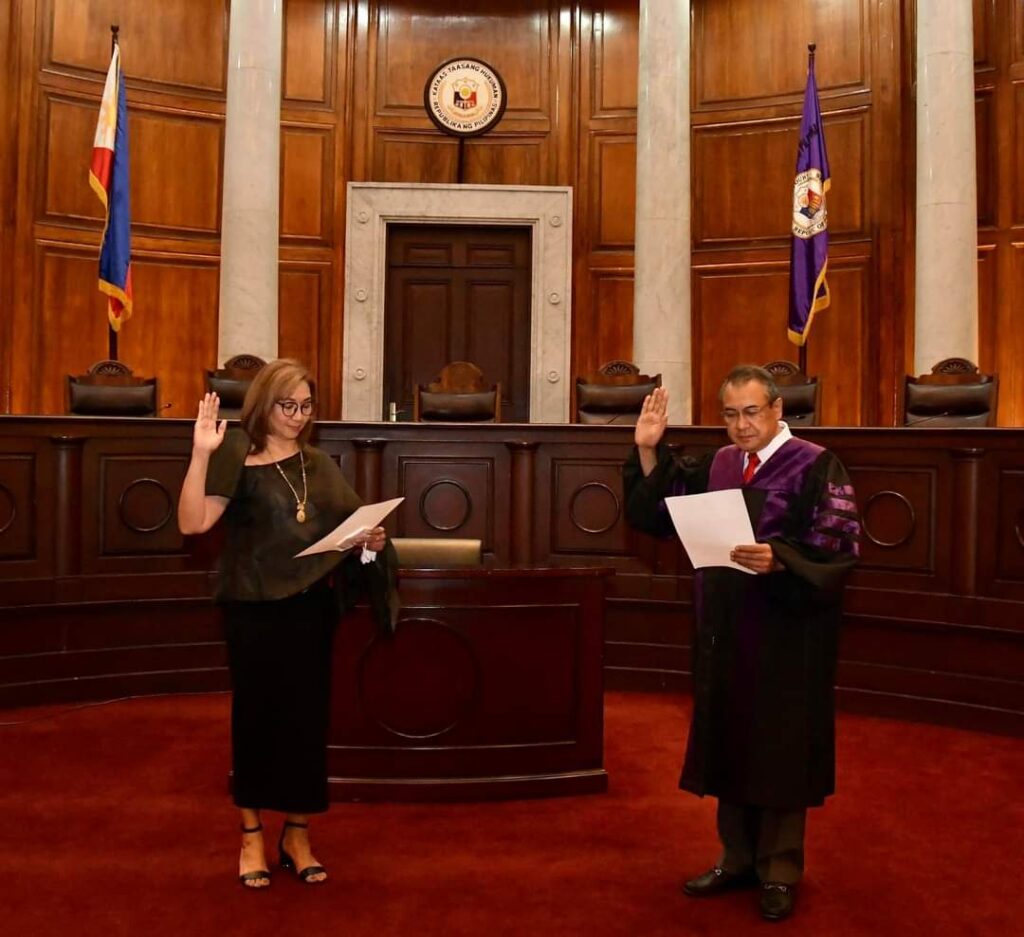 Justice Maria Filomena D. Singh took her oath as the 194th Associatbe Justice of the Supreme Court before Chief Justice Alexander G. Gesmundo at the En Banc Session Hall on Wednesday evening, May 18, 2022.

Her appointment completed the 15-member roster of the Supreme Court.

She studied at the Washington College of Law of the American University in Washington, D.C., USA for a Master of Laws in International Legal Studies.

She practiced law for 10 years before joining the Judiciary in October 2002 as the Presiding Judge of Branch 31 of the Metropolitan Trial Court (MeTC) of Quezon City.

She was Executive Judge of the MeTC-Quezon City and served for two terms in that capacity.

Simultaneously, Justice Singh was selected and sat as the Representative of all First Level Courts in the country on the Board of Trustees (BOT) of the Philippine Judicial Academy (PhilJA).

She served in the PhilJA BOT until her promotion to the Regional Trial Court of Quezon City as Presiding Judge of Branch 85 in June 2007.

Justice Singh was bestowed the Don Antonio Madrigal Award as Most Outstanding First Level Court Judge of 2007 by the Society for Judicial Excellence of the Supreme Court.

On March 14, 2014, Justice Singh was appointed as an Associate Justice of the Court of Appeals.

Prior to her appointment to the High Court, she was the Senior Member of the Court of Appeals Second Division.

She also served on several committees of the Supreme Court.

She is the Chairperson of the Civil Law Department of the PhilJA, as well as its Sub-Committee for Curriculum Review.

She is also a member of the Faculty of Law of the Ateneo de Manila University and of the University of the Philippines College of Law.

In 2021, she was selected as the 17th Metrobank Professorial Chair Lecturer, a distinguished lecture series for outstanding members of the Judiciary.