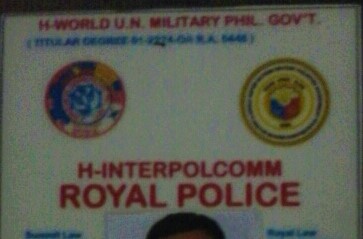 Unknown to many, a creepy group is fielding local candidates in small towns, promising “funding” to chosen local folks to run for Mayor, Vice Mayor and Councilors.

Among veteran political observers, “Maharlika” is linked with “Marcos”.

Meanwhile, many Bicolanos are going to Manila to avail of “job offers”.

The “authorized signatory” of this ID is a certain 5 Star General Marcos . . .”

The holder said he will be given initially an allowance, and to undergo training, while many member Bicolanos already went to Manila during the past two weeks to attend “training”.

Somebody suspects the “H World U. N. Military Phil. Gov’t.” is a front for a “political militia” group.

It is not known who is their “Big Boss” candidate.

LOWER PHOTO shows the signature of the official with name as ” 5 Star General Marcos . . .”

Note: Info about the ID Owner is not shown for his protection.